Scott Walker is dead last in the Midwest for job growth, and that’s after tax cuts and draconian cuts to spending.

Like Walker, Kansas Gov. Sam Brownback made even bigger cuts, and now it’s all falling apart: 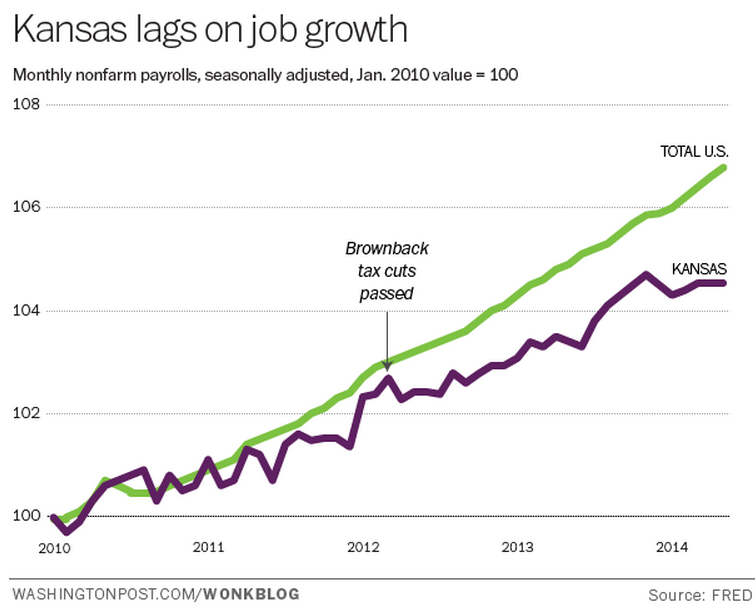 WaPo: Gov. Sam Brownback … tout the success of his economic program, particularly several rounds of income tax cuts amounting to the largest in the state's history … job growth hasn't exactly materialized … job growth in Kansas has actually lagged behind the U.S. average, especially in the years following the first round of Brownback tax cuts in 2012.

Niraj Chokshi reported on a Center and Budget Policy Priorities study of Kansas' cuts. In an unusually frank assessment from the nonpartisan think tank, the study's authors concluded that "Kansas is a cautionary tale, not a model. As other states recover from the recent recession and turn toward the future, Kansas’ huge tax cuts have left that state’s schools and other public services stuck in the recession, and declining further — a serious threat to the state’s long-term economic vitality.

Here's Scott Walker's private sector jobs chart, see any similarities? Republican supply side economics is a failure, and needs to be stopped: 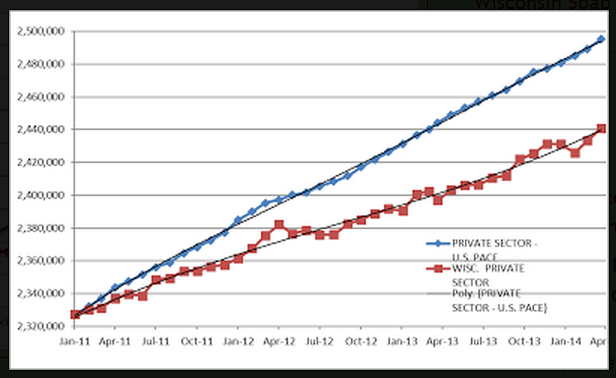 After posting this story, I noticed Uppity Wisconsin also covered this incredible similarity, and wondered why the media isn't going after Scott Walker like they are with Sam Brownback. A good question.
Posted by John Peterson, Democurmudgeon at 6/28/2014 12:51:00 AM