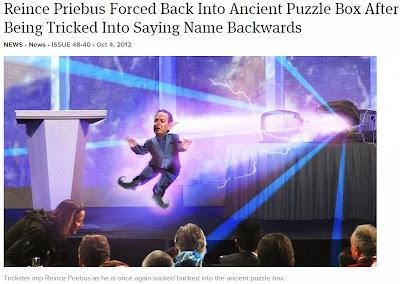 Onion: Startled sources at a GOP fundraiser confirmed Thursday that after being duped into saying his own name backwards, ancient elfin mischief-maker and Republican National Committee chairman Reince Priebus was cast back into the gilded puzzle box that has confined him for millennia.

Priebus, a wily, mystical creature who has reportedly carried out right-wing political trickery at numerous points throughout recorded history, was said to be delivering a speech on traditional family values when he unthinkingly read the words “Subeirp Ecnier” aloud off the teleprompter, immediately causing the lights in the Omni Hotel to flicker and sending a powerful, chilling wind through the convention hall.