Every few years a story like this appears, and then disappears almost as fast. Fuel efficient cars, three wheeler's and heck, even fly cars. So it is with tepid excitement I bring you the next car story that might just end up like all the others. Hopefully this time I'm wrong. The gyroscopic balancing mechanism on this two wheeled "car" is amazing, but oddly, part of technology that's been around for some time: 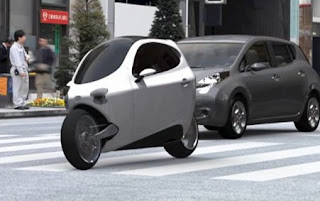 The Atlantic: In a large garage in San Francisco's SOMA District, a company called Lit Motors is building a car unlike any other.

The company's C-1 is half the size of a Smartcar and designed for a driver with one passenger in the back seat. But despite its small size, the vehicle is capable of driving in all weather, with gyroscopically stabilized wheel technology that prevents it from tipping over. The C-1 is fully electric, and can drive up to 200 miles on a single charge.

In fact, the C-1 isn't really a car at all: It's officially classified as a motorcycle, but CEO Daniel Kim says that the vehicle resists classification.

As for the vehicle's purchase cost, the ticket price is estimated to be close to $20,000 for early adopters, but that cost will go down significantly--to around $16,000--once the product gains sufficient market share to enable bulk manufacturing. The C-1 is slated for initial release in May 2014, and more than 250 people have already put down a deposit to buy one as soon as it's available.