Like Plundering Pirates, these Cowardly Michigan Republicans protected themselves from Recall and Desperately Rushed a Flurry of Bills through in the Dark.

Make no mistake, this is how Republicans would run government. This is their authoritarian dream fulfilled. They’re not interested in debate, deliberation and public input like they claimed during the one year passage of Obamacare.

Like thieves in a jewelry store, Michigan Republicans stole their government in the middle of the night when no one was around to stop them. It happened here in Wisconsin, but god, nothing like this (paragraph two is breathtaking): 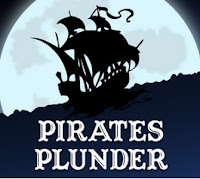 PoliticusUSA: What do you do when you aren't representing the people and they’re starting to get wise to you? You make it harder for them to recall you. That’s what the Michigan Republicans did this morning.

Amid a flurry of lame duck ALEC based legislation they passed, including allowing concealed weapons in schools, churches, arenas, hospitals and more (that they passed this on the eve of the Connecticut elementary school shooting tragedy appears to have caused no shame), weakening abortion rights, restricting medical marijuana, and taking away collective bargaining from unions, Michigan Republicans also passed legislation aimed at creating a safety net for their theft of democracy. It is now harder to recall your lawmakers, the governor and local officials … There is both a shorter time for signature gathering and you now have to have a primary with an opponent rather than an up and down vote on a recall.

Michigan Senate Minority Leader Gretchen Whitmer (D-East Lansing) asked Republicans, “Why are you making it more difficult to recall an officeholder? Yet you jam it through in dark of night on the last night of a lame-duck session… You’re trying to inoculate yourselves from a recall.”

This move echoes the propaganda Republicans sold in Wisconsin, that recalls are not the way to “express” yourself. “Recalls shouldn't be used for disagreeing with a vote.”

If you have to violate the democratic process, if you have to violate Open Meeting Laws, if you pass things in the dark of night without debate, if you have to lie to the people about your intentions, if you mislead people deliberately, then you should be subject to recall. And that’s why Michigan Republicans just took more of that process/freedom away from the people. They don’t want voters to be able to make their displeasure known, so they simply moved the goal post of the recall.