Democrats have buckled under the fear of NRA threats for so long, they don’t really have a plan for sensible gun laws that work. Why do other countries that allow gun ownership have low crime and death rates? Are there any Democrats offering up a list of effective laws?


Democrats are offering nothing but talk. No lines in the sand, no will to fight: 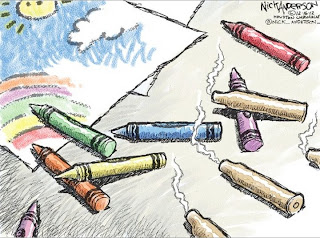 jsonline: Senate Minority Leader Chris Larson (D-Milwaukee) said that "that if 20 children being murdered isn't the time to talk about guns, I don't know what is." Larson said he backed laws that would stop straw purchases. He also said there needed to be more scrutiny of people with psychological or mental health issues seeking to buy firearms.

The Newtown shooting did not involve the purchase of firearms, so what the hell is Larson talking about? And after decades of NRA bullying, Larson wimps out with talk of “bipartisanship.” It’s never been bipartisan before.

But any law involving guns, gun ownership and restrictions needs a bipartisan discussion, he said.

That’s not a position, that’s giving up.
Since guns are supposed to make us safer, why do we have to arm ourselves for protection? Think about it; we can only be safe if we have a gun. That's what it's come down to.

Gun nuts are forcing everyone else to have guns, taking away their freedom to live in a safe society without the threat of gun violence and death. If you don’t own a gun, you’re an easy target, it’s that simple. So you better get a gun, or else. This flawed thinking rules the day:

Sen. Alberta Darling (R-River Hills) Darling said she does not see guns as the problem but rather the people who are using them in such mass shootings … One concern Darling has is that when Wisconsin recently passed the law to allow concealed carry of guns, it exempted places such as schools and day care centers. She said that makes them a target because shooters could assume that no one inside the building has a gun.

"When you single out that schools will not have that option, that signals to perpetrators and that is an issue," she said. "I think we need to talk about it, advertising where people aren't able to protect themselves."

Nik Clark, chairman of Wisconsin Carry Inc., which supports open carry and concealed carry laws in Wisconsin, said the Connecticut shootings made him wonder, too, whether educators and others should have the right to possess a firearm in schools to protect themselves.

Sure Sen. Larson, let's be bipartisan.