Whose Cutting Medicare and Medicaid? Yup, Paul Ryan is Back, and Saves Big Oil their Taxpayer Handouts.

It didn't take long for Paul Ryan to come back and slash Medicare and the children’s Medicaid programs, all the while giving that money to a bloated military that hasn't balance their books in 2 to 3 decades and misplaced $2 trillion. What I see is a Republican military authority in the future, if the policies of today go unaltered.

But will Democrats point the following cuts out? 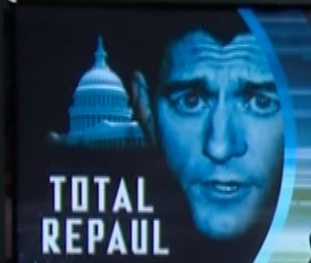 WSJ: GOP Ryan spending plan: The House on Thursday passed a Republican bill (HR 6684) to replace about $110 billion in soon-to-begin across-the-board cuts in military ... with a new round of domestic spending cuts. Sponsored by Rep. Paul Ryan, the bill's main purpose was to head off $55 billion in automatic defense cuts over one year under so-called "sequester" rules of the 2011 Budget Control Act.

The bill also would make new cuts in domestic programs such as Medicare, Medicaid, food stamps, the State Children's Health Insurance Program (SCHIP) and the 2010 health law. The bill's net effect would be to achieve $236 billion in domestic spending cuts over ten years, about 92 percent of which would come from entitlement programs, while protecting the defense budget for one year against automatic cuts under the sequester.

Big oil's taxpayer handouts received overwhelming support and protection by Ryan and his fellow Wisconsin lawmakers, all the while trashing the same kind of support for the development of the emerging green energy industry. I'ts all part of the upside down world of conservatism.


Oil tax breaks, Medicare cuts: Voting 179 for and 243 against, the House on Thursday defeated a Democratic bid to repeal tax breaks for the five largest oil companies and use the savings to soften cuts HR 6684 would make in Medicare, Medicaid and the State Children's Health insurance (SCHIP) program.