My conservative friend called me last week with what he thought was “a gotcha” story, where President Obama met with Rachel Maddow, Ed Schultz, Lawrence O’Donnell and Al Sharpton.

When I reminded him of Bush’s meeting with conservative media hosts he changed the subject (not because of the hypocrisy, but because that’s how conservatives have debates).

And thanks to Media Matters, I can now say that my friend wasn't the only one whining. In fact, radio talker Laura Ingraham made a complete ass of herself complaining:

The December 5 edition of conservative pundit Laura Ingraham's newsletter attacked President Obama for recently meeting with MSNBC personalities, claiming that "if Fox News hosts and conservative personalities had stopped by the Bush White House to discuss policy" the press "would have been rightly outraged." 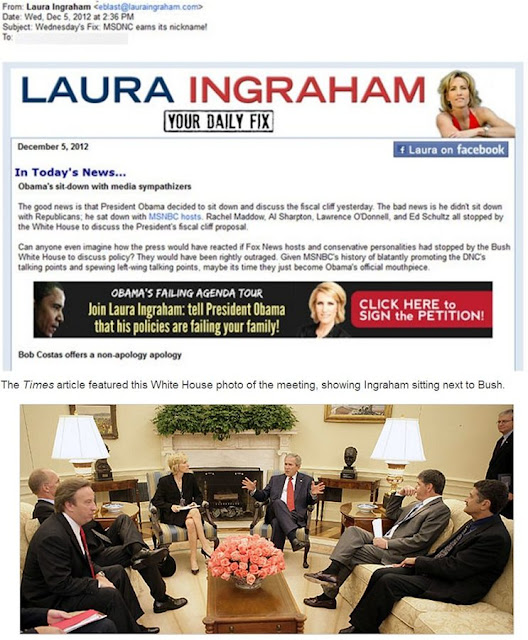 Even funnier and more outrageous than the image above was Ingraham’s other meeting with the president:

From the Times article: Mr. Gallagher said that he and the other hosts -- Mr. Hannity, Ms. Ingraham, Neal Boortz and Michael Medved -- talked about the experience on their programs "for days and days and days." But Ms. Ingraham, who recently went bike riding with the president, has continued to complain about federal spending…

Are these people utterly shameless or what?

note: Staff wrote the piece for Ingraham, but she stands by their email release claiming the circumstances were different. Aren't they always? .