Walker says he'll avoid controversial issues, even though he'll sign them into law if forced by the legislature?

I’ll be honest, I really didn't believe Scott Walker had his eye on a presidential run. I’m now convinced he’s going for it.

So far, Walker has disavowed interest in everything coming out of our extremist legislature. 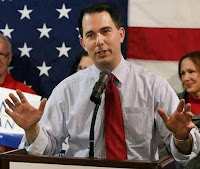 Leader Telegram: Gov. Scott Walker promised Tuesday in Eau Claire to avoid controversial distractions in the second half of his first term and focus instead on five priorities he has set for Wisconsin … creating jobs, developing a stronger workforce, transforming education, reforming government and investing in infrastructure … "Anything that distracts from the focus on those five priorities — No. 1 being creating jobs — is just a huge distraction."

But if it’s dropped on his desk…?

On a side note, Walker intends to reward higher achieving school districts with more state funding?

"We'll probably do some sort of general school aid increase," he said, adding that he hopes to target much of any additional education spending to school districts that perform well or make strong gains on new statewide school report cards that were launched this year.

Does that seem ass backwards? Am I hallucinating from my morning coffee? So funding is a reward and not a source of change or reform for districts that need help?
Posted by John Peterson, Democurmudgeon at 12/12/2012 09:09:00 AM