Scott Walker, victim of his own party's repeal of Same Day Registration. Don't Blame Him.

Well at least Scott Walker’s kid doesn't have to worry about registering to vote again.

The press continues to act disconnected from reality when covering Scott Walker. Are they as dumb boards? 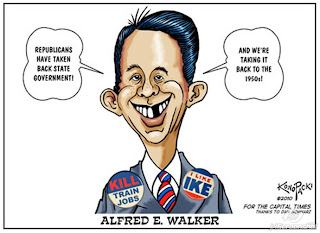 Let me get this right; Scott Walker doesn't really think the issue of same day registration is important, but would sign in a heartbeat the repeal of the age old law. Even after taking advantage of the law with his own kid?

So the press is stumbling all over themselves portraying Walker as some kind of thoughtful, fair minded politician?

The poor guy would have to sign into law a bill if forced by the legislature?

My god have we lost our minds?

Poor Scott Walker, looks like he’ll have to end same day registration. Damn those legislators who took his cue from the speech he made in California.
Posted by John Peterson, Democurmudgeon at 12/08/2012 12:36:00 PM