Amazing!!! Walker on board with NRA Guns in Schools Lunacy!! Voted Conservative of the Year

What has amazed me is the jaw dropping media reporting of the NRA's announcement of armed security everywhere, as if their suggestion was an actual alternative to rampant serial gun deaths.

But low and behold there's Gov. Walker in full support.

Have we gone completely mad? Do supporters of this lunacy have any idea what life in America would look like 10 or 20 years from now? Since when does "freedom and liberty" mean forcing everyone to carrying guns. What's next, the fastest draw wins again? 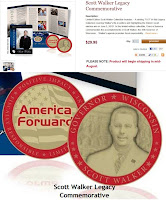 WSJ: Gov. Scott Walker said that arming school officials should be part of the conversation in the wake of the tragedy. But his spokesman, Cullen Werwie, said that the governor won't add funding in the next state budget to add armed officers in public schools as the NRA suggested. "We shouldn't jump to conclusions either on gun control or on putting armed officers in public schools," Werwie said. "The real issue is dealing with the individuals who get to a point where they can go through with such a horrific act."

Really, and how would we do that without...doing anything at all...nothing, zilch? I told you Republicans were the biggest freeloaders. Working hard by coming up with solutions...are you kidding?

WSJ: Walker now has been named "Conservative of the Year" by Human Events magazine. The editors of the magazine — which favors limited, local government; private enterprise; and individual freedom. They wrote, "He was denounced, protested, and demonized to the point where he shared space with Adolf Hitler and deposed Egyptian strongman Hosni Mubarak on protest signs."

Local government, if you mean the Walker authorities control over local governments spending. Looks like Human Events magazine believed all the press releases and typically uncritical media coverage of Walker.

This is the high bar for conservatives? The ultimate achievement? Walker's record; despite his incompetence he's creation of only 25,000 jobs in two years, the worst in the Midwest, and was rated one of the worst states for business by Forbes Magazine after giving away the farm to big money, that didn't give Human Events a cause for concern?
Posted by John Peterson, Democurmudgeon at 12/22/2012 10:42:00 AM