When you think about it, it would be hard to be a functioning industrialized, civilized society without law. Imagine the optional compliance with our laws. Chaos is a word that comes to mind right away.

Yet conservatives continue treat the concept of “law” like something voluntary, obeying the ones they like, and ignoring the ones they don’t like. They've gone as far as writing laws that aren’t constitutional, but still “good ideas” anyway.

Not even the conservative activist Supreme Court will be allowed to stand in their way when the decision doesn’t agree with them: 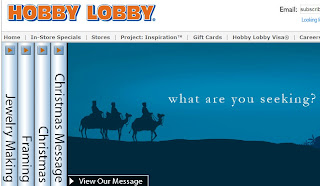 NewsOK: Oklahoma City-based Hobby Lobby will defy a federal law, (a rejection of an emergency stay by Supreme Court Justice Sonia Sotomayor) that requires employee health care plans to provide insurance coverage for types of contraception that the firm’s owners consider to be “abortion-causing drugs and devices,” an attorney for the company said Thursday. Hobby Lobby and sister company Mardel could be subject to fines of up to $1.3 million a day beginning Tuesday.

“They’re not going to comply with the mandate,” said Kyle Duncan, general counsel of The Beckett Fund for Religious Liberty, which is representing the company. The Green family, owners of Hobby Lobby … said a provision dealing with insurance coverage for certain types of contraception — the morning-after pill, the week-after pill and some intrauterine devices — went against the family’s beliefs.

But no one is forcing the family to abandon their beliefs. Instead, the law firmly protects the beliefs of other Americans working at their companies. The Green family's freedom cannot infringe on the rights of other peoples freedom. That goes against the authoritarian streak in most conservatives.

Hobby Lobby and Mardel operate more than 500 stores and employ more than 13,000 people … the company will continue its appeal in the 10th U.S. Circuit Court of Appeals, where it is challenging U.S. District Judge Joe Heaton’s ruling that the retailers were “secular, for-profit corporations” and did not have free-exercise rights under the First Amendment.