Is it hard to imagine Constitutional conservatives demanding the deportation of someone in our freedom loving country for something they said? Not at all. Freedom and liberty is nothing more than symbolic rhetoric to them, like flag pins and military supporting car magnets. It’s all showboating.

The Second Amendment may as well have been written by God, the way these bloodthirsty low information voters bow in subservience to the last few words of the amendment and the NRA.

Never lose sight of the fact that these people say they know what the founding fathers meant when they wrote the constitution, and that they are the real freedom and liberty loving patriots. In the words of recording artist Joe Walsh, "You Can't Argue with a Sick Mind." : 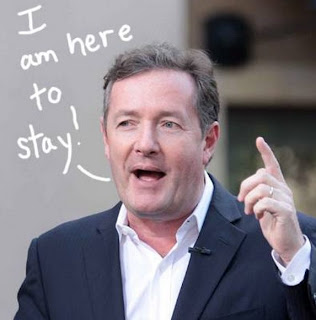 From The Hill: White House petition to deport Piers Morgan soars past threshold: A White House petition calling for the deportation of CNN personality Piers Morgan, a U.K. citizen, over his recent comments criticizing U.S. gun laws rocketed past the 25,000 signatures it needed for an official response Monday. As of this writing, nearly 40,000 people had signed a petition demanding “Mr. Morgan be deported immediately for his effort to undermine the Bill of Rights and for exploiting his position as a national network television host to stage attacks against the rights of American citizens.”

“I don't care about petition to deport me,” Morgan tweeted Monday. “I do care about poor NY firefighters murdered/injured with an assault weapon today. #GunControlNow.” Morgan was referring to yet another high-profile shooting that took place in western New York … four firefighters were shot, two of them fatally, while responding to a fire near Rochester.

The furor over Morgan’s comments began after a contentious interview with Larry Pratt, the executive director of Gun Owners of America. "The argument I keep hearing is 'well if everybody else was armed, it wouldn't happen.' It's a load of total hogwash," Morgan told Pratt and other gun rights advocates who appeared on the show.

"How many more kids have to die, before you guys say, 'we want less guns, not more?'" Morgan added.