State Republicans played by lobbyist’s “conflict of interest,” and mining business sleight of hand to game system. What goes around comes around?

I love this story.

The Walker authority, along with his legislative pirates, couldn't wait to shower big business with praise and legislative gifts.

Now they’re finding out the old saying is true, “there’s no honor among thieves.” I guess I’m really surprised that our conservative lackey’s are surprised. 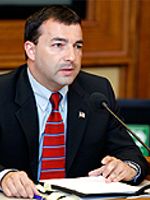 Tim Sullivan, the head of the Wisconsin Mining Association, is coming under fire for taking a paid position with a firm that would compete directly with the proposed $1.5 billion iron ore mine in northern Wisconsin. Sullivan was elected this week to the board of Cliffs Natural Resources, a post that could pay Sullivan as much as $200,000 per year. Sullivan officially joins the board on Jan. 14, according to a company spokeswoman.

"It's absolutely a conflict of interest," said Bob Seitz, chief lobbyist for Gogebic Taconite, the firm hoping to open the large mine in Ashland and Iron counties. Seitz described Cliffs as Gogebic's "main competition" in the production of taconite pellets.

It took a while, but even slow thinkers like Rep. Scott Suder eventually catch on:

Rep. Scott Suder, the incoming Assembly majority leader, criticized Sullivan for not disclosing his ties to Cliffs when he testified before a Senate committee last week on the mining legislation. "I find this very disturbing," Suder said of Sullivan's work for Cliffs. "This raises some pretty serious red flags about Tim Sullivan's personal ethics and all of his comments about mining over the last six months."

No, really? Sullivan by the way trashed the original assembly bill, one of the reasons Scott "dim bulb" Suder is throwing a temper tantrum. And he said something that made sense a few days ago:

Sullivan has expressed private concerns that the Assembly measure would lead to lawsuits and even scare away investors from future projects. Calling the criticism of him "strange," Sullivan declined to say whether he believes he is coming under attack because he is recommending changes in the Assembly-backed legislation.