What is it about Michigan? Didn't they know putting a super majority of Republicans in charge would have devastating results? And what will their legislature look like in January? Did Michigandians wise up?

In a state known for labor unions, Republicans took just an hour and a half to crap all over that history, in a power grab that should scare the daylights out of anyone who might think they're next.

Deliberative and smart is not how the Republican Party rules. While a poll revealed that only 6% believe right to work was important, Republicans weren't thinking of the voters, they were determined to carry out their plan to destroy unions. Here's Ed Schultz: 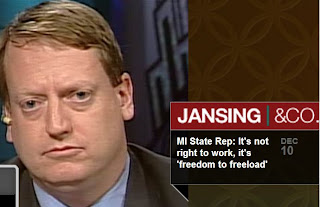 Labels: Right to Work, Unions
Email ThisBlogThis!Share to TwitterShare to FacebookShare to Pinterest