If you thought it was odd for Rep. Don Pridemore to announce his run for state superintendent so he could bring conservative values to education, while not receiving any criticism for politicizing a nonpartisan office, check out the picture of an overdose of conservative hypocrisy below. but first, check out Pridemore's comment in the video from WKOW.

The right wingnuts at Media Trackers went straight to the online recall blacklist to trash State Superintendent Tony Evers for his opposition to Scott Walker. I mean what the heck, can you imagine the top supporter of public schools getting behind all those lousy state teachers, when he could have simply declared his allegiance to the Walker Authority?

Breaking story? Only to these wackos. 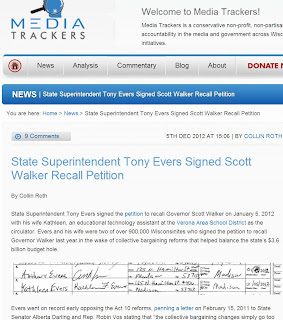