I'm fed up with the press trying NOT to say "assault rifle" when talking about the school shooting. Where did they pickup this ridiculous and mindless disclaimer?


jsonline: State Attorney General J.B. Van Hollen questioned passing new gun control laws … said some had taken a “knee-jerk” reaction … said he wasn’t convinced proposals to ban such weapons, often referred to as “assault rifles,” would have made any difference in this case.

“Often referred to...?” The AR is short for assault rifle. 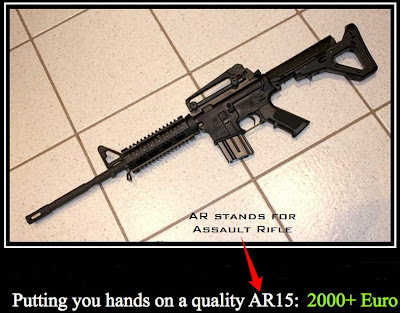 I want to buy into anything people can show me will reasonably reduce horrible senseless acts of violence like this,” Van Hollen said.

It’s not reasonable to ban a weapon, which would take that weapon over time, off the street. Is that reasonable? Until then, what we have now is working? Or should we wait till we change the subject?

But J.B would rather turn schools, what used to be a safe haven for kids, into security compounds so gun nuts can caress their hobby:

The attorney said policy-makers should look at the possibility of spending the money needed to put armed police officers in schools and at limiting the access of firearms to the mentally ill.

How would we have limited access to the mentally ill in the Newtown tragedy, take the mothers guns away?
Posted by John Peterson, Democurmudgeon at 12/18/2012 03:36:00 PM