After reading the following, it occurred to me that Rep. Marco Rubio doesn't know WTF he's talking about. He appears to want to blame government for the ills of the free market: 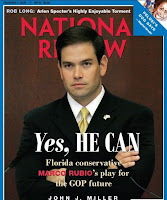 The Hill: Sen. Marco Rubio (R-Fla.) said smaller government could help boost the middle class … “Americans are struggling to find or keep middle-class jobs for two reasons: because our economy is not creating enough of these jobs and because too many of our people don’t have the education or skills required for the jobs that are being created,” Rubio said. “A limited government can and must help solve these challenges.”

A "limited government can and must help.." but that wouldn't be very limited, would it?

I’m sorry, but if the free market isn't “creating enough of these jobs,” and people aren't receiving the “skills required for the jobs,” than who’s left to step in and change things? The free market? This couldn't possibly make sense to conservative voters (but it does).

But even worse, Rubio’s solution has nothing to do with his comment.

Which supports my reaction, WTF!!!

This is not a solution. These aren't real arguments.

Rubio, like Paul Ryan and the Republicans war on entitlements and tort reform, have it ass backwards. They want to attack the victims of bad policy, instead of preventing and changing bad policy.
Posted by John Peterson, Democurmudgeon at 12/08/2012 12:09:00 PM