In Wisconsin, Democrats got more Votes, while Republicans won more seats. Can you say Gerrymandering?

While Republicans won the talking point that they won the election in the 2012, they actually lost the vote. In fact, you'd never know there was a strong Democratic constituency in Wisconsin, by what we've seen in the Republican legislature. It's an illusion pushed by the Walker Authority.


Redistricting totally gamed the system, and gave Paul Ryan ability to falsely claim Americans wanted Republicans to control the House. Without redistricting, they would have lost dramatically.

Bill Lueders, who is the Money and Politics Project director at the Wisconsin Center for Investigative Journalism (www.WisconsinWatch.org), wrote this about gerrymandering: 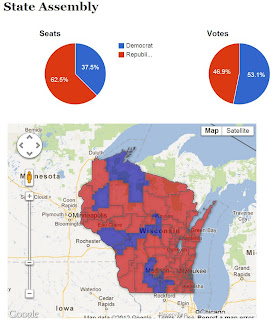 Brookfield Patch: Democrats received more votes statewide in the November elections, but Republicans won more seats. What does that say about redistricting? Republicans were able to keep a 5-3 lead in the U.S. House of Representatives, reclaim control of the state Senate by a margin of 18 to 15 seats, and secure a commanding 60-39 advantage in the state Assembly, despite getting fewer votes overall.

These are posted with this column at WisconsinWatch.org. They depict a mostly red (Republican) state, even though Democrats got the most overall votes in every category.

Hey, if Democrats had the chance, they would have done the same thing, right? Keep this fact in mind:

Wisconsin Watch: Cal Potter, a former Democratic state lawmaker who now serves on the board of Common Cause in Wisconsin, a nonpartisan watchdog group, noted that the redistricting after the 1990 and 2000 Census was done by the courts, because the Legislature and governor were split and could not agree on a plan. This time around, he said, the GOP ran the show and was able to maximize its electoral advantages.

Labels: Gerrymandering
Email ThisBlogThis!Share to TwitterShare to FacebookShare to Pinterest