Racism and Ruthlessness Destroying our Country! Football Fans Lash out at Obama.

Some people didn't like the timing of Obama's appearance in Newtown, because it took time away from Sunday Night Football. How dare the president commiserate with the parents and town folk who were devastated by the loss of their children.

The following is an example of how our grand experiment is collapsing, and surprise, it had nothing to do with socialism, taxes or gay marriage. From Deadspin:


NBC pre-empted the first quarter of tonight's 49ers-Patriots game to show President Obama's speech at the Newtown memorial for victims of the Sandy Hook shooting. As you might expect, many football fans didn't take kindly to this. .

And this is only a small sample: 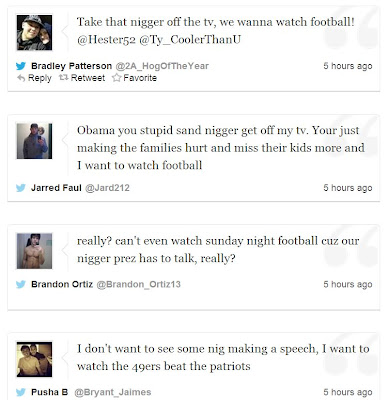