Forbes Magazine: Wisconsin one of "The Worst States for Business!!!"

Scott Walker can't hide! Forbes Magazine has some really bad news for the governor and his merry band of thugs. Even though many in the media treat Walker as a successful Republican job creator and reformer, he's anything but. It's right there in the Wisconsin State Journal: 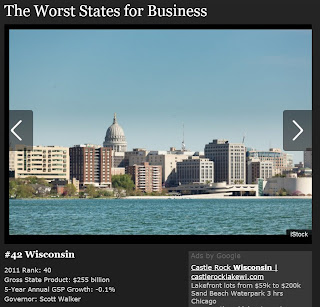 Wisconsin is one of the 10 worst states in the nation for business, according to a Forbes magazine ranking released Wednesday.
Wisconsin is No. 42, two notches below its No. 40 ranking for 2011.

"The Badger State adopted the slogan 'Open for Business' in 2011, erecting signs along the state border. The results have been middling at best as job growth is projected to be second worst in the U.S. through 2016," the caption reads, under a photo of Madison's skyline.

Forbes said the rankings are based on data from 10 sources and focus on "six vital factors" for businesses: costs, labor supply, regulatory environment, current economic climate, growth prospects and quality of life.

But wait, I distinctly recall Gov. Walker bulldozing through his long wish list of corporate giveaways, with the slogan Open for Business? Uh oh. Check out Walker’s bragging points, which amazingly, don’t include Act 10:

Within minutes of taking the oath of office, my first official act as governor, was to begin to implement a comprehensive Emergency Jobs Plan. I declared an economic emergency and called a special session of the legislature that began on inauguration day and did not end until the legislature passed measures that included, but were not limited to: 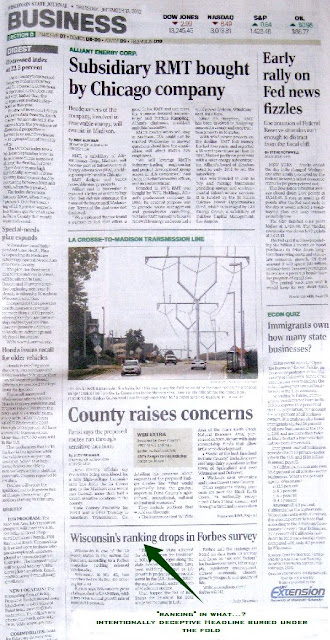 Reforming the Department of Commerce into a true Economic Development Agency.

Immediately convening a Waste, Fraud and Abuse Commission that was intent on curtailing wasteful spending at all levels of state government … we were successful in laying the foundation for future job growth … more jobs have been created in Wisconsin while the rest of the country still seems intent on watching unemployment rates rise.

More jobs, really, or the LEAST AMOUNT OF JOBS?

It's a Forbes gotcha!

Note: This applies to Forbes' one-sided corporate agenda, and has nothing to do with quality of life. Another con is the screwy way Walker changes subject in midstream about his failure to create jobs; instead of providing the "gained jobs" numbers, he pivots to a survey of corporate CEO's who say we're headed in the right direction. Forbes doesn't think so.


Governor Walker remains committed to helping Wisconsin's private sector create 250,000 jobs by 2015. After years of record job loss, Wisconsin gained jobs during the Walker administration. And in the annual survey of job creators, 94% said Wisconsin is headed in the right direction (compared to just 10% who said the same thing in 2010).