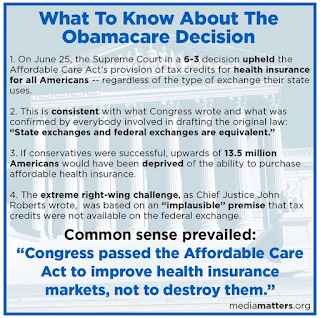 The title is a direct reference to "stand with Walker" trolls, who are constantly telling me to shut-up because they won, not because they actually have a legitimate argument.

There's more to come here, as I dissect Rand Paul's criticism of the court ruling and his ridiculous plan for health care that no one with common sense would agree with.

This wasn't a "close" decision, it was 6-3, with the typical partisans voting as we knew they would. That predictability should not be possible.

ALERT: Fox News just stopped talking about the Affordable Care Act ruling, as big as it was, at 11:15 am, so they could talk about the IRS emails.

Here are some of the first reactions, pointing out how Republicans are now off the hook, not having to deal with angry voters who will lose their subsidies; and a pie chart of approve/disapprove of ACA,

For Fox News, this moment of sane analysis should be preserved in amber:

Our own right wing loon Rep. Glenn Grothman cast doubt on both the executive branch and the judicial branch of government. Scary stuff. You have to wonder what kind of government would make them happy:


“The uncertainty working families and employers throughout my district have suffered because of Obamacare is disappointing, to say the least,” said Congressman Grothman. “It is frustrating that once again the Supreme Court has disregarded Congressional intent. This ruling shows us that the rule of law is under attack by not only the Obama administration, but also the Supreme Court.