For years and years, Republicans have not just defended and made the Confederate Battle flag their own, but they've waved it proudly as a free speech right. Now, suddenly a few conservatives here are trying to say it's a Democratic flag.  They want us to forget how the parties flipped after the civil rights movement. Sorry, but this debate is going on now, not the mid 1800's. 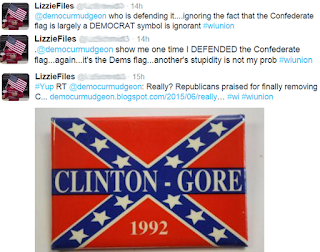 
It became a divisive and violent emblem of the Ku Klux Klan and white supremacist groups.

Forgetting would be the only way they can make their next loony tunes argument; they have always hated the Confederate flag.

Check out a "Stand with Walker" string of tweets to the right. Marvel at the disconnect. Clinton and Gore...Confederates?

Ever wonder why racism is now so pronounced and open? Since Obama became president, the Republican Party has worked hard to rationalize away their inner racist feelings, with distractions like his birth certificate, supposed Islamic faith, "imperial presidency," relationship to terrorists, weak foreign policy, etc.. The picture below says it all.

Here's one example of the spin:

The GOP wasn't involved? Only if all the black ministers and NAACP were Republican. Here's what really happened: 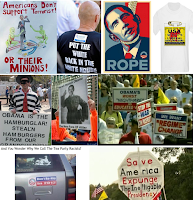 A 1994 nonbinding referendum placed on the GOP primary ballot found that three-in-four voters said the flag should keep flying. That same year, black ministers and the NAACP threatened a boycott of the state if the flag didn't come down, and business leaders sued to remove the flag.

But in 2000, a compromise was reached — the battle flag would be removed from atop the dome and a smaller, square version would be placed at a less-prominent place on the Statehouse grounds — on a 20-foot pole next to the 30-foot Confederate monument. But that didn't end the controversy, and many years of protests, criticism and boycotts followed.

How about that Southern "Democratic" stronghold Mississippi?


Many Southern states' current flags are inspired by the "Rebel flag." Mississippi's state flag remains the only one in the U.S. that still features the battle flag prominently. In 2001, Magnolia State voters decided to keep the current flag by a wide margin. The University of Mississippi, or "Ole Miss," has also faced controversy. In 1997, waving Confederate flags at football games was banned. "Colonel Reb," their Confederate soldier mascot, was retired in 2003 and, "From Dixie With Love" was dropped from the marching band set list.

Check out the brisk Neo-Confederate Party sales action at Amazon.com. These are the hot items. Yea, we're so over that race thing... 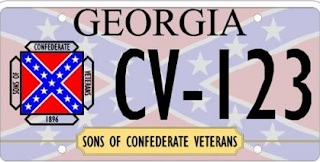 NOTE: Amazon and other sites have already pull all Confederate products off their pages. That was quick.


Gov. Nathan Deal is sticking with the offending state license plate, like a good Democrat....I mean Republican would.
Posted by John Peterson, Democurmudgeon at 6/23/2015 02:10:00 PM