Paul Ryan is at it again, making broad unmistakably big lies about the Affordable Care Act.

Ryan knows if he sounded really-really convinced, and took a ridiculously strong position, many Americans would just assume what he's saying is true. Like this: 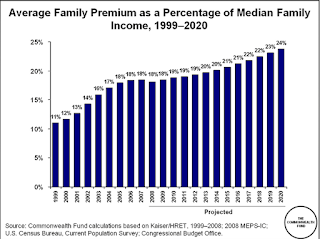 Rep. Paul Ryan spoke as his panel began questioning Health and Human Services Secretary Sylvia Burwell about the law. Ryan cited requests by many insurance companies for double-digit rate increases for next year as evidence that the health care overhaul isn't working.

Oops, if that were the standard use to determine the success or failure of ObamaCare, then health insurance before the Affordable Care Act was also a massive failure.

The chart above shows the incredible premium increases prior to the Great Recession starting in 1999 to 2007. The recession forced insurers to stop raising prices due to the struggling economy.

Below, Ryan read carefully from his prepared statement, because he had to get the biggest lie just right;


"ObamaCare is just flat busted. It just doesn't work. And no fix can change that fact."

Wow. And he had nothing to back that up except his strongly asserted lie.

Also in the video clip is Democratic Texas Rep. Lloyd Doggett, who surprised me with a very effective attack on Ryan's blatant agenda.


Doggett: "...we have an historic moment, where chairman Paul Ryan is saying to that supreme court, "Please deny $52 million a month in federal tax relief to the people of Wisconsin because I have such an ideological commitment to destroy this president and his health care plan..."

MSNBC's Steve Benen wrote this about our not so wonkish "genius:"


GOP lawmakers have gone from making a series of spectacularly wrong predictions to simply buying their heads in the sand, pretending real-world results don’t exist. It’s almost sad to watch.

The L.A. Times’ Michael Hiltzik flagged this gem yesterday: Ryan seemed to think that would be a good thing, or at least that providing subsidies so people can have coverage is a bad thing. The federal government, he said, “has sent millions of subsidies out the door, putting millions of people at risk.” Interesting outlook: he’s saying that helping people puts them at risk, and a lawsuit backed by the Republican establishment that would strip away that assistance will be good for them.

Sahil Kapur flagged this Bloomberg Politics report, which reinforced fears that Paul Ryan simply doesn’t know what he’s talking about. Representative Paul Ryan said, “We will have a Republican alternative to deal with this, so that people who are caught in the crossfire of this unconstitutional law – should the court determine that it’s unconstitutional…”

But King v. Burwell isn’t a challenge to the law’s constitutionality … the frequency with which Paul Ryan makes absurd claims should cast doubt over his credibility.