I've mentioned this before, but the wide spread use of guns to settle arguments is here to stay. It's become a more natural solution to settle disagreements, replacing fist fights. 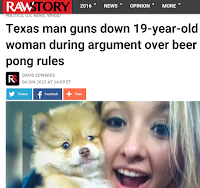 That's why we're seeing an increase in senseless killings that still seem hard to believer or explain, as the headline here shows.

Then there are the leaders of gun rights groups who continually prove that they are some of the most irresponsible gun owners ever. Law abiding...until something goes wrong or they accidentally breaks the law. And even then, Republican legislators pass laws protecting those same irresponsible acts, making them responsible again.

Enter Larry Pratt. Would Pratt have said the following if he didn't feel confident other "responsible" gun owners had his back, or if we didn't have a black president?

RawStory: Gun lobbyist Larry Pratt has proposed a Second Amendment solution for lawmakers with whom he disagrees, and now he wants gun owners to train their sights on President Barack Obama.

“The Second Amendment was designed for people just like the president and his administration,” Pratt told right-wing radio host Roger Fredinburg. Right Wing Watch reported that Pratt, executive director of Gun Owners of America, understood his apparent call for the assassination of the president might create a stir. “If the New York Times and the Rolling Stone, and whoever else wants to have a hissy fit – yes, our guns are in our hands for people like those in our government right now that think they want to go tyrannical on us, we’ve got something for them,” Pratt said. “That’s what it’s all about.”

In every state open carry advocates are scaring the daylights out of everyone not carrying guns, the majority of people. It's like the public should be able to sense how safe these gun toting absolute strangers are. What could go wrong?

But their arrogance and ego will only get worse, like the video here shows. Turn down the volume , this guys a loud obnoxious gun carrying patriot.


Open Carry Texas posted aYouTube video on Wednesday, showing president CJ Grisham argue with police officers over his right to stand on a corner with two colleagues and an assault weapon each, strapped to their backs.


Grisham instructs one officer to order “[his] man” to “stop threatening me” and to “stand down.” When police attempt to speak with Grisham, he announces, “I want your hands off the rifles before I get comfortable.” Grisham asks why cops felt compelled to give a warning armed with AR-15s. When police pointed out Grisham too was in possession of a large weapon, he dismissed the concern since the gun was “on [his] back.”

“I’m a law-abiding citizen. I’m minding my own business,” Grisham complains to police. “Do you know why I’m feeling this way right now?” “I feel threatened,” Grisham explains loudly, “because you are a police officer and you have people with rifles here that are threatening me.”
Grisham tells local news outlet KTAB that “an armed society is a polite society.” Guns are “not designed to kill,” Grisham tells reporters. “They’re not designed to shoot up movie theaters and schools. We’re trying to show what law abiding citizens look like that carry firearms and really remove that stigma.”

In his Twitter profile, Grisham writes, “I don’t pull punches. I’m an Oath Keeper, a veteran, & I’m not afraid to speak my mind. I own my opinions & won’t apologize for them. Liberty, justice, freedom.”

Sounds very polite. By the way, local officials apologized for the cops, and said they would try and improve their uncalled for behavior. Really.
Posted by John Peterson, Democurmudgeon at 6/05/2015 09:22:00 PM

Labels: Guns, Open carry in the United States
Email ThisBlogThis!Share to TwitterShare to FacebookShare to Pinterest