Kooyenga scheme to eliminate Alternative Minimum Tax not just handout to wealthy, but to "simplify tax code, clean it up?"

They’re called the “accountant caucus,” a group of self-righteous supply side republican legislators desperately trying to fit their agenda into the real world. It’s not working, but they won't admit it.

Leading that charge is Rep. Dale Kooyenga. When he helped pass the “freeload for Big Ag and Manufacturing” tax cut, along with misguided compression of the tax brackets, he never accounted for the alternative minimum tax affect on business owners, an unintended consequence that he's now trying fix:

Many more taxpayers including small-business owners became affected by the state alternative minimum tax after lawmakers and Walker passed manufacturing and agriculture tax credits in 2013.

Funny thing, conservatives who hate the freeloading poor and unemployed don't mind Walker's ticket to corporate freeloading. In some cases, these freeloading tax free businesses will get a tax refund if their deductions are especially high.


The tax is meant to ensure filers with large amounts of tax deductions or exclusions pay a minimum amount of income tax.

Kooyenga's tax cut has so blatantly targeted the wealthy that he's trying to disguise it;


Kooyenga framed his proposal as a means to simplify Wisconsin’s tax code. “We’re not pushing for tax cuts. We’re pushing for a tax cleanup,” he said. So by making the tax code less complicated, you're making it more advantageous to growth."

UPDATE: Thanks to Jake's Economic TA Funhouse, it looks like Kooyenga is trying to quickly repair a mistake that cost his wealth conservative constituents plenty:


The largest increases, both in the count of taxpayers subject to the minimum tax and in AMT liability, occurred for taxpayers with AGI of $200,000 to $500,000. In this income group, the count increased from 2,552 to 20,081, and the total AMT liability increased from $2.2 million to $14.3 million. By combining the third and fourth tax brackets, Act 20 created a bracket which is quite wide … Previously, the marginal rates were at or above the AMT rate, but now the rate for the combined brackets is below the AMT rate.

Remember, Kooyenga's claim to fame centers on his experience as an accountant. Nice one Dale.

And not hearing a peep out of conservative voters.

Wealth Envy? In case you’ve missed it, the richest in our state continue to get “help” with their taxes, while the rest of us are supposed to be happy with a $5 a year tax savings.

Rep. Chris Taylor pointed out how obvious this agenda has been: 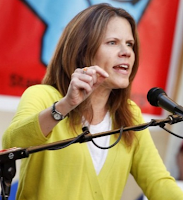 According to the nonpartisan Legislative Fiscal Bureau, Republicans have spent $1.9 billion in various tax giveaways between 2011 and 2014.

Including a $60 million tax cut for wealthy parents who send their children to private schools.

And now we’re about to see the elimination of the AMT, at the same time Republicans are making massive cuts to past public investments and complaining about a very tight state budge.


Indian Country Communications Chief Executive Officer Paul DeMain said that the "base" that conservatives are calling for to be broadened are actually picking up more and more of the tax liability instead of the wealthy.

NOTE: Kooyenga continues to blame the budget shortfall this time around on the big increase in Medicaid spending. But here's the thing; he knew that was coming, and could have planned for it. Instead, he's blaming BadgerCare help for the uninsured. Priorities?