We don't keep the kind of records we should about concealed carry, castle law killings and general gun ownership, but what we do have is scary as hell. 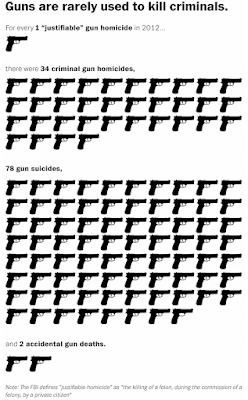 Washington Post: In 2012, there were 8,855 criminal gun homicides in the FBI's homicide database, but only 258 gun killings by private citizens that were deemed justifiable, which the FBI defines as "the killing of a felon, during the commission of a felony, by a private citizen."

Centers for Disease Control and Prevention data shows that in 2012 there were 20,666 suicides by gun. That works out to one self-defense killing for every 78 gun suicides. CDC data show that there were more than twice as many accidental gun fatalities as as justifiable killings.

Perhaps this chart is all anyone will ever need to make the argument against the Supreme Courts reckless 2nd Amendment assumptions.