The idea that Justice Antonin Scalia is a good practicing Roman Catholic who uses his faith to inform his judicial decisions is bullshit. Oh sure, that works for his argument against redefining marriage, but not the death penalty, right? Anyone else notice the contradiction? 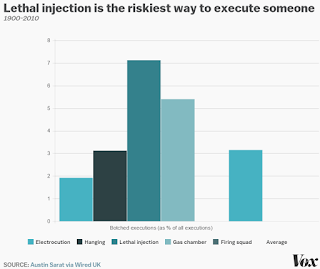 And the very idea that those opposed to the death penalty overall, not just lethal injection, couldn't prove their case is also preposterous.


In a 5-4 decision, the court concluded that petitioners didn't adequately prove that midazolam violates Eighth Amendment protections against cruel and unusual punishment.

The graph to the right shows the percentage of botched executions across the board, whether it's lethal injections, gas chamber or electrocutions.

After reading through Scalia's tantrum like dissents filled with nonsensical words that disrespects all professional norms, Scalia made it clear "the people should decide." You know, like the thoughtful rumblings of an angry mod fixin' for a lynchin.'

Scalia made the leap that our current government sanctioned death penalty is an offshoot of the Age of Enlightenment.  Or it could be holdover of those more brutal medieval times?

The two more liberal justices posed a more "enlightened" question based on the percentage of botched executions; is the death penalty itself unconstitutional:


Justice Stephen Breyer and Justice Ruth Bader Ginsburg called on the Court to reassess whether the death penalty was constitutional at all, and said they had both come to believe that it "now likely constitutes a legally prohibited 'cruel and unusual punishment.'"

That's when "Scalia wrote a separate concurrence, joined by Justice Clarence Thomas, which said not only that Breyer was wrong, but that he was rejecting the entire Enlightenment." This is what passes for conservative intellectualism:

Innocent People are being Executed:


At least 4 percent of people who receive death sentences in the United States are likely innocent, a 2014 study finds … (and they) would ultimately be exonerated if their cases were closely examined for the next 21 years.