After being told so many times by republicans, “you lost, we won, shut up, try winning elections,” I found it fascinating to hear conservative FCC commissioners whine about Democratic members pushing through their own and the presidents agenda. 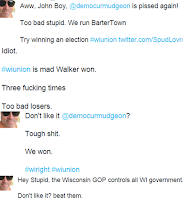 I’d like to think Democrats are no longer fooled by these old GOP tactics. We’ve watched Scott Walker literally ram through everything that’s been on the GOP/ALEC wish list for years, and then some. With no Democratic votes.

There is little or no discussion period leading up to their surprise bills with stealth language, passed without a single vote by the Democrats. Remember, not having a single vote by Republicans on the Affordable Care Act was supposedly horrific, made it all illegitimate. And yet quietly and successfully, Republicans have created a governing standard for Democrats only that require bipartisanship.

So when the conservative FCC members cry like little babies about the president and his majority commissioners getting their way, well, it’s very annoying. Here's a condensed sample:

The Hill: Republican FCC commissioner Michael O’Rielly accused the body’s Democratic majority of trying to force through an expansion of broadband subsidies for low-income Americans before President Obama leaves office … “It is clear that the majority wants to spend as much as they possibly can without any hint of restraint before a possible change in Administration” … O’Rielly also accused unnamed commission leaders of lying to him … “being deceived in order to produce one of the most slanted documents I’ve ever seen” … new net neutrality rules that the Republicans disagreed with … the Republican commissioners decried a move to fine AT&T $100 million for misleading customers about throttling their data plans.

Why would Republican FCC commissioners get so angry about penalizing a big business like AT&T? Was it unfair? I think the financial guys at The Motley Fool described it well:

AT&T has never quite understood what the word "unlimited" means.

The wireless company was more than happy to sell customers data plans that used the term, but were not quite unlimited. Instead, AT&T played fast and loose by slowing data after users crossed a monthly consumption threshold. Because the data was not shut off -- merely slowed dramatically -- the wireless carrier claims it was honoring its offer.

That, of course, would be like an all-you-can-eat buffet limiting customers who ate too much to one visit per hour while only allowing them to fill a tiny plate. Yes, you could stay all day and partake of the "unlimited" food, but following a promise technically is not the same as respecting it in spirit. AT&T advertised one thing and delivered something else. The Federal Communications Commission thus has fined the company $100 million.

In Republican world, this would be considered okay, no crime no foul. One of the commissioners even gets his information, like my conservative friend in Milwaukee, from fringe right wing media sources, where the news...isn't "real:"

“...the justice dispensed here condemns a private actor not only in innocence but also in ignorance.” He has also turned to outlets with a conservative bent — like The Wall Street Journal, The Daily Caller, and Fox News — to press his case on various issues in the past. Pai said that he felt he wasn’t always able to negotiate in good faith with members of the commission’s majority.

Boohoo, welcome to my world. So you have to laugh when you get a teary eyed response, like the one below, from our playground bullies...the Republicans:


Pai also claimed that there were more party line votes under Wheeler than previous chairs.