Defending the Confederate Flag, Rush predicts American Flag next!!! This is not the Onion!!

Like Joseph Goebbels before him, Rush has fixated on one specific group, liberals, vilifying and branding them as anti-American fear mongers worried sick the American flag will turn citizens to the political right. I must have missed that email.

Like an Onion parody, Rush takes reality and twists it into fun filled propaganda that low information conservative voter believe hook-line-and-sinker. Hat tip to my conservative friend in Milwaukee, who sent me this, writing in the subject line (shortened here):

"This is true I've said it 4 years. When the State Department has decided not to fly the American flag at embassies because it's afraid they might offend and when you can't wear an American flag t-shirt in a high school … it's already here hope you're proud."

Rush Limbaugh's prediction is humorous to me, but scary to those right wing hypocrites that can't stop talking about defending the 1st Amendment:

“The next flag that will come under assault, and it will not be long, is the American 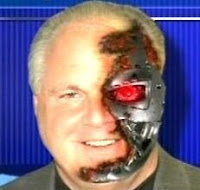 flag. It is gonna happen. We are trending that way. It makes perfect sense. If you take a look at the timeline of progression of events, the speed and rapidity with which the left is conducting this assault on all of these American traditions and institutions, if you don’t think the American flag’s in their crosshairs down the road, you had better stop and reconsider.

The American flag is what? It’s the symbol of America. The left, what? Doesn’t like this country very much and never has and it’s getting angrier and angrier about it seemingly every day. The American flag stands for the United States of America and as such, everything that’s wrong with it. And you wait, it isn’t gonna be long before the American flag is gonna cause chills, fear, scary thoughts … [because] it’s a symbol of hate.”

Rush's thoughts are crazy, but the underlying premise is real; the repeated use of symbols denoting patriotism have not just given the U.S. Constitution to the GOP, but the flag as well. Troll tweeter LizzieFiles alerted me to this weird study. Wanna bet we're going to see an avalanche of flag display requirement laws throughout the nations Republican legislatures:

Just a brief exposure to an image of the American flag shifts voters, even Democrats, to Republican beliefs, attitudes and voting behavior even though most don't believe it will impact their politics, according to a new two-year study just published in the scholarly Psychological Science.

What's more, according to three authors from the University Chicago, Cornell University and Hebrew University, the impact had staying power. "A single exposure to an American flag resulted in a significant increase in participants' Republican voting intentions, voting behavior, political beliefs, and implicit and explicit attitudes, with some effects lasting 8 months," the study found. "These results constitute the first evidence that nonconscious priming effects from exposure to a national flag can bias the citizenry toward one political party and can have considerable durability."

Another recent Harvard University professor's study that found that kids who attended a July 4th parade ended up leaning Republican when they grew up.

It's also sure to prompt GOP presidential candidates to add more U.S. flags at their events and speeches.

Democrats could learn a few things about marketing...I mean propaganda.