Let's start with the first problem: Republicans always weasel out of answering questions by refusing to address “hypothetical's.” In this case though, Justice Scalia turned the tables.

In another Salvador Dali moment of logic, Justice Scalia came up with a hypothetical that’ll blow your mind: What if wind and solar did more harm than burning coal? He really said that.

But it doesn’t? It was a wretched twist of reality. 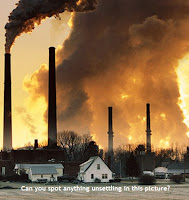 It’s an argument that defies logic, and is never addressed by the press either. Republicans have always said environmental standards must balance the cost to business with the cost to human health and lives.

Not even close, right, who would not try to save lives by cleaning up energy production? The fact that most utility companies are already moving in the clean energy direction anyway makes this whole question a moot point.  But not to our clueless conservative jurists stuck in the 20th century.

"We hold that EPA interpreted unreasonably when it deemed cost irrelevant to the decision to regulate power plants," Justice Antonin Scalia wrote in the court's majority opinion … The Obama administration argued that the costs were only a fraction of the industry's profits. The EPA eventually did (look at the costs) and determined that the benefits far outweighed the costs.

There was no mention of saving lives. And you wonder why the national debt keeps going up; Republicans won’t let it come down unless it has a tax cut tied to it.

In a fiery dissent, Justice Elena Kagan said the EPA acted "well within its authority" in imposing regulations that could save "many, many lives."

Saving many, many lives is such a "liberal" thing. Senate Majority Leader Mitch McConnell flipped reality inside out about the actual cost of doing nothing:


"Middle-class families in Kentucky and across our country … are often the first to suffer."