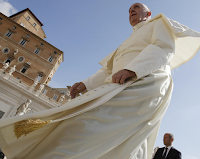 Duplicity is the currency of today ... they say one thing and do another.

Francis issued his toughest condemnation to date of the weapons industry, “If you trust only men you have lost,” he told the young people in a long commentary about war, trust and politics, after putting aside his prepared address.

“It makes me think of ... people, managers, businessmen who call themselves Christian and they manufacture weapons. That leads to a bit of distrust, doesn’t it?” he said to applause.

He also criticized those who invest in weapons industries, saying “duplicity is the currency of today ... they say one thing and do another.”