Scott Walker made it very clear about his plans for public education. The title of his opinion piece, in the Des Moines Register, was "We changed broken education system." It wasn't for the good, but yes, he changed it.

K-12: Walker injected private sector principles into what we decided long ago would be "public."
There was a reason we took the profit motive out of it. But that's over. Teachers can now focus on their paychecks, and not concern themselves with their community or commodified kids. There's always someone who'll pay them more, right?

Walker wrote about all the choices parents will have from the growing number of competing businesses offering an education that's out-of-this-world...or so says the advertising brochure. Remember, parents know this stuff instinctively, and will make the right choices. We trust them, and they like it when we say that. But if they're not happy, they can always send a nasty letter to the schools CEO, via their public relations department: 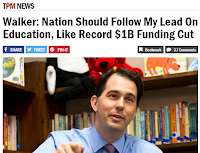 Walker: "I believe that every child deserves access to a great education — be it at a traditional public, charter, choice, private, virtual or home school environment. We need leaders who value quality choices and who trust parents to put the interests of their children first."

UW: The same is true of our great public university. Thank god Walker took care of that, before he focused all his attention the presidency. Check out the following article about Scott Walker's irrational attack on the UW system by Forbes' contributor Steve Salsberg:

It’s rare for a governor to attack the flagship university in his own state. Governors usually do just the opposite, promoting their universities to the rest of the world whenever the opportunity arises. Thus it’s surprising–startling, really–to observe how Scott Walker is waging a war on academic freedom in his home state of Wisconsin. Let’s look at what he’s doing, and then ask why.

The Wisconsin faculty responded that this new policy, if implemented, will inflict lasting damage on a highly successful institution….It would be difficult to overstate how destructive and unnecessary the [legislature's] proposed changes to tenure and shared governance are.

Perhaps the reason behind Walker’s dislike of academia is that he thinks that professors are too liberal. If true, this is deeply disturbing: it means he wants to stifle speech that he disagrees with. This kind of repression of scholarship is one of the most important reasons for tenure in the first place. One doesn’t have to look far–hello, Vladimir Putin?–to find examples of how powerful politicians can suppress speech, to the detriment of their societies.

As UC Irvine’s Mark Levine wrote this week, none of academia’s core functions could occur without tenure and the assurance of academic freedom it enables.

The leaders of a national university governing board association (agreed), pointing out that under Walker’s proposed new policy, “decisions about a tenured faculty member’s service could be based less on performance and institutional finances and more on the political or personal views of board members.”

Governor Walker’s actions make even less sense when viewed from outside the state, where the University of Wisconsin is considered one of the nation’s top public universities (currently ranked 13th among public schools).

Walker is sending a message that professors at Wisconsin should sit down and shut up. It’s disturbing that Wisconsin’s governor is using his power not only to weaken one of the state’s biggest assets, but also to attack the free expression of ideas. I can’t come up with any explanation for his actions that doesn’t appear vindictive and short-sighted. This isn’t the kind of behavior I want in any politician, and certainly not in someone who wants to be the most powerful politician in the nation.