Walker, the guy who never answers questions, answered one today: War in Iraq? Why not.

After Jon Stewart's incredible take down of Republican foreign policy, what he called "America in the Middle East: Learning Curves are for Pussies" (see it here), you would think presidential candidates like Scott Walker would try to be more reflective. Not a chance; the GOP has not only ignored the lessons learned, but are doubling down on the old Bush policy.

According to Scott Walker, in an interview by ABC’s Jonathan Karl: 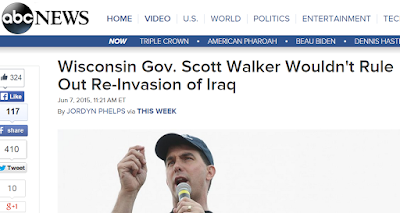