This will be one of the many news reports we'll see disappear under the avalanche of Scott Walker spin encouraged by the media. They love a horse race don't they?

Reuters News actually took a look a the results of Walker's "Open for Business" scam/giveaway to corporate welfare recipients, and cuts to basic services and transportation. It's not good:


On the Wisconsin border, little enthusiasm for Walker's tax cuts: Walker has cut state taxes by $2 billion as his state has climbed out of recession. Unemployment in Superior now stands at 4.6 percent.

Ask local officials and business leaders, and they will say Walker's policies have little to do with a turnaround that has moved in tandem with the national recovery. Tax cuts haven't lured many businesses across the bridge from Duluth, Minnesota, they say, while the loss in revenue has prompted steep spending cuts to education, harbor maintenance and road construction.For some, the tradeoff is not worth it. "We should put the $2 billion in roads or education," said Superior Mayor Bruce Hagen, a self-described conservative.

Here's where the normally envious conservative voter should get angry. Will they like seeing manufacturers and Big Ag paying almost no tax, unlike themselves, while essentially freeloading off everything taxpayers have to build and maintain?

The tax difference between the two cities is dramatic. Manufacturers will see their corporate tax rate drop to 0.4 percent in Wisconsin in coming years, compared to 9.8 percent in Minnesota. Wisconsin firms also pay less in unemployment insurance (another Walker scam), workers' compensation and sales tax. Yet Superior isn't pulling ahead … Private sector-employment in Superior grew by 5.6 percent ... between January 2011 and September 2014 … In Duluth's St. Louis County, jobs grew by 9.8 percent during that period.

Meanwhile, the number of businesses in Douglas County declined by 6 percent - double the rate in St. Louis County.

Do we have to say it again: Taxes not the driving factor. The chart compares Democratic Minnesota to a Republican Wisconsin: 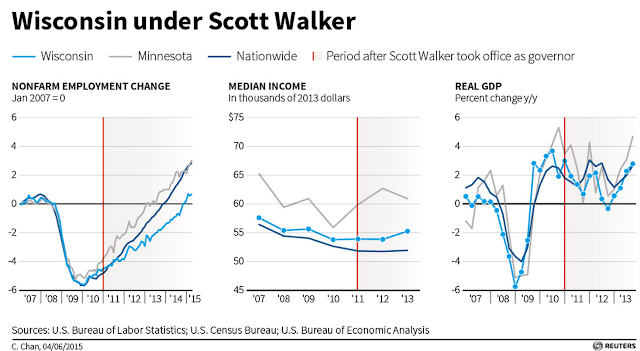 Private-sector employment grew by 6.4 percent in Wisconsin between January 2011 and March 2015, lagging the national pace of 10.7 percent, according to the U.S. Bureau of Labor Statistics.

Along the waterfront, Mike McCoshen surveys huge piles of limestone and road salt unloaded from freighters plying the Great Lakes. His company, Hallett Dock, tapped state harbor-maintenance funds to expand its operations in Wisconsin in the years before Walker took office. The program was all but eliminated in Walker's latest budget proposal - an unwelcome development for other shipping businesses. As for Walker's tax cuts? "They haven't made us grow or recede at all," he said.


The Joint Finance Committee voted Thursday to restore funding for maintenance and improvement projects at Wisconsin ports. The Harbor Assistance Program received around $17 million in segregated fees and bonding in the last state budget. That funding was almost completely stripped under Gov. Scott Walker's budget proposal. The program helps pay for public and private dock repairs, shipbuilding and more.