Our "constitutional conservative" Governor Scott Walker may also have to brush up on our founding document while he's at the library studying up on foreign policy.

Walker's recent outrageous comments about those "cool" "lovely" ultrasound pictures forced on women seeking an abortion can now be viewed in context with today's U.S. Supreme Court decision that let stand a lower court ruling that the law is unconstitutional. The decision is state specific, and does not apply to Wisconsin. 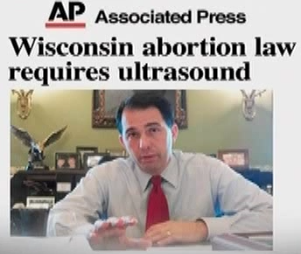 “We signed a law that requires ultrasound which, think about that, the media tried to make that sound like a crazy idea. Most people I talk to, whether they’re pro-life or not, I find people all the time who’ll get out their iPhone and show me a picture of their grand kids’ ultrasound and how excited they are, so that’s a lovely thing ... It’s just a cool thing out there.”

UNCONSTITUTIONAL!!! And so is Walker's unconstitutional attempt to restrict and regulate our 1st Amendment right to protest our government. Wisconsin's ultrasound law is similar to North Carolina's:


The Supreme Court on Monday refused to hear an appeal from North Carolina officials seeking to revive a state law that had required doctors to perform ultrasounds, display the resulting sonograms and describe the fetuses to women seeking abortions.

The order left in place an appeals court ruling that had held the law unconstitutional as a violation of the First Amendment. “The state cannot commandeer the doctor-patient relationship to compel a physician to express its preference to the patient,” Judge J. Harvie Wilkinson III wrote in December for a unanimous three-judge panel of the United States Court of Appeals for the Fourth Circuit, in Richmond, Va. “This compelled speech, even though it is a regulation of the medical profession, is ideological in intent and in kind.”

Monday’s development, which set no precedent, did not affect the validity of any law aside from North Carolina’s.

In light of the legal decision described above, you might view the following Sen. Mary Lazich explanation in a completely different way. Her opening and closing comments stand out. From WPT's Here and Now: