So what about Walker's miserable jobs record, where he only managed half of the 250,000 promised jobs? Oh, but the unemployment rate is down. Huh? It turned out, Walker was just promising to "aiming high." Got it.


Karl: "That was a central promise you fell significant short, so should we expect you to fall short in the promises you're making now?"

Walker: "No, when you look at all the other promises.."

So how did all those other promises work out?

Walker lowered property taxes each year? So that's why we can't pay our bills anymore, prompting massive cuts to the UW, defunding state parks, cutting the already short staffed DNR, and the inability to fund the transportation department. And that of course explains the "budget surpluses," only after dismantling everything the public has investment money in over a last 50 years. And can we really count a $5 property tax cut?

Walker froze tuition, which solved that problem...it did?

And we're not evening counting his failure as CEO of the Wisconsin Economic Development Corporation. Tanked big time (here's the latest).

The best list of Walker's mismanagement and failed promises can be found here, at The Political Environment. If this is Walker's record as governor, so far, can you imagine the chaos we would see with him as president? This cartoon continues to haunt me: 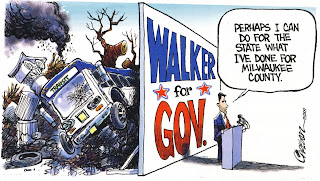