Vouchers? Pure right wing politics...and not what the public wants!!!

District superintendents are making it clear, they don't want voucher expansion. It's not about protecting teachers or schools, it's about what the public wants and the politicians who aren't listening.

Republican voting districts are objecting to the proposed changes to school funding and voucher expansion, so what's the problem, why are things getting worse? It's pure ideology and the agenda of partisan extremists who rise to the top as elected officials. And they're not listening at all.

I would like to think that voters will change affiliation for one election at least to send a strong message it's not alright to destroy the quality of local school districts for the almighty quest to privatize schools for profit.

It's never been about giving parents a choice, since they're not familiar with the strides made in recent years in curriculum and teaching techniques. It's about parent insecurity and fear, and playing on that to push a profit driven system of education. It's parent and child exploitation, clear and simple. 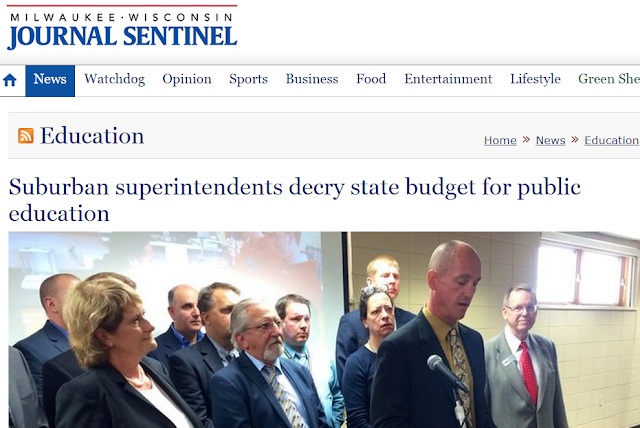 jsonline: The superintendents, who predominantly hailed from high-income suburban schools and many districts that voted Republican in the last election, gathered at Range Line School in the Mequon-Thiensville School District to urge lawmakers to amend the budget changes for K-12 schools approved by the powerful Joint Finance Committee in recent days.

Gov. Scott Walker's proposed budget wasn't kind to public schools, but the committee's amendments had made things worse by adding items such as a significant expansion of the statewide voucher program, a special-needs voucher program, a new civics test graduation requirement and teacher-licensing changes.  Mequon Superintendent Demond Means (said) "There's been so much dialogue between public officials about the Bucks and what's best for that building, but limited dialogue between elected officials and education leaders about what's best for schools,"

Want even more proof this politics driven? In the Racine Journal Times:

No charter schools, Gateway says: Even if it gets the power, don’t look for Gateway Technical College to open charter high schools anytime soon … a state budget provision allowing Gateway to authorize charter schools emerged, the college says it has no plans to open a school and that it is not being discussed. Gateway instead plans to continue working with local high schools on initiatives already in place, a Gateway official said. “We’re going to continue to work with the secondary schools in the tri-county area to develop those successful partnerships.”

State Rep. Thomas Weatherston, who authored a bill earlier this year giving all technical colleges the ability to authorize charter high schools, is holding out hope that Gateway would reconsider … “I think under the right circumstances, they might go ahead and try it.”

Proof of Partisan agenda: See, no one was asking for this. I think this says it all about the disconnect between the public and the arrogant Republican majority's prepackaged nationwide agenda:

Gateway met with Weatherston about his legislation about a year ago but noted it did not initiate the bill and “even indicated it wasn’t a direction we were moving.” Gateway has several successful programs with local school districts, like an initiative with Racine Unified called career pathways, in which students can earn college credits or industry certification before they graduate high school. “That is the path we have moved forward with and will continue to move forward with,” Sklba said.

Proving the point that these know-it-all republican politicians are sticking their noses in places they have no right to be meddling.
Posted by John Peterson, Democurmudgeon at 6/04/2015 04:47:00 PM