Sheriff sends out Citizen Vigilante's to protect 60 black churches in Arizona. Guns are only making us safer....

What happens when an activist conservative Supreme Court reinterprets and expands the 2nd Amendment so much that every bigot and racist now has an excuse to take the law into their own hands? The new and "improved" 2nd Amendment hit at a time when verbal racist attacks on the first black president morphed into what many see as justifiable outrage over every one of his liberal policies.

So what are the great protectors of freedom, liberty and guns going to do about the violence, hate and killing. Maybe open carry?

Arizona now has the jaw dropping answer to our conservative version of freedom and liberty. So guns are making us safer? 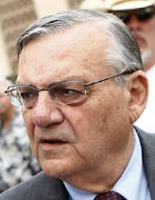 The Hill: Maricopa County, Ariz., Sheriff Joe Arpaio will send armed volunteers into 60 predominantly black churches Sunday in response to the shooting at a Charleston, S.C., church. Arpaio said he was responding to a request from Rev. Jarrett Maupin, who USA Today reported is a progressive Baptist preacher and civil-rights advocate, to provide the volunteers. Arpaio said Maupin told him he was worried about racist white supremacists in the area, according to USA Today.

This is a nationwide problem though. And it looks like folks all over have already given up on society. Check out the headlines and the feeling of hopelessness:

There seemed to be no panic among attendees. One Pennsylvania man, who declined to be named, said: 'I guess you have to expect this kind of thing in Washington, don't you?