A Desperate Walker Promised Jobs after Recall, gets 38 Business Groups to Advertise to save his ass. 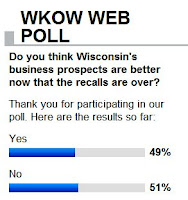 During the recall campaign, Walker maintained the specter of the recalls was a paralyzing factor for many small businesses.

That empty and preposterous lie is about to meet reality, unless:


WKOW: An advertisement to publicize Wisconsin as a place to do business is scheduled to appear in the Wall Street Journal, USA Today and other publications Monday.

But guess what, this corporate panic attack to save Walker’s skin, is getting ridiculously heavy spin to convince us it was planned “for some time.” Yeah, right. Planned around the same time he promised a jobs rush from impatient businesses chomping at the bit to hire.


They think we’re suckers! Businesses hire employees because of product demand, not on a politician’s electoral success. My god, if he really thinks that…

Here's where's Walker's fat gets pulled out of the fire:


Officials said the advertisement campaign's $109,000 cost is being funded by 38 different business groups, including Madison-based Thrive.


Sen. Glenn Grothman (R-West Bend) said the end of gubernatorial and senate recalls give existing Wisconsin businesses certainty as they plan business strategy. "They know for the next two and a half years, you're not going to have anti-business extremists in charge of the regulatory agencies. I also believe you're going to have expansions almost immediately."