Talk Host Sykes whines about John Doe Leaks, while hypocritically spreading them himself.

From the “you can’t make this stuff up department,” Walker henchman Sykes got caught in a little projection, illegally leaking John Doe investigation secrets while accusing everyone else of doing it. 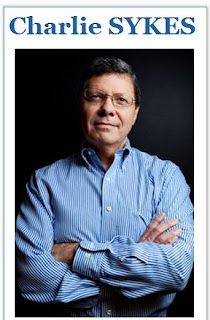 jsonline; Responding to claims they had leaked information on the John Doe investigation involving some of Gov. Scott Walker's aides, Milwaukee County prosecutors say two disclosures came from attorneys for one of the defendants.

Michael Maistelman, a lawyer for defendant Timothy Russell, sent an email to radio talk show host Charlie Sykes on Jan. 22, tipping off Sykes to the likelihood that two other former Walker aides would be charged that week. Those aides, Darlene Wink and Kelly Rindfleisch, were charged four days later … it was remarkable Russell's lawyers had complained of a "not-so-secret" John Doe investigation when they disclosed information themselves.

Sykes and other defenders of the Republican governor have complained of illegal information leaks on the Doe investigation … Sykes said Tuesday he has referred to the investigation as "leaking like a sieve." Sykes declined to comment on the email he got from Maistelman or how prosecutors got it.