Sheriff David Clarke should have lost his job by now, but like most freeloading conservatives, he won't leave office. He's rotten to the core. 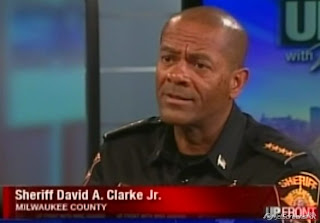 jsonline: The decision by Milwaukee County Sheriff David Clarke to virtually shut down an inmate electronic monitoring program prompted a heated exchange Thursday, with the county's chief judge saying the move artificially boosted the jail population … Clarke, who didn't attend a hearing on the subject by the County Board's Judiciary Committee, was faulted as shortsighted, petty and vindictive for curbing the jail alternative program.

Chief Judge Jeffrey Kremers said Clarke had refused to meet with him for months on why the monitoring program has been curtailed, making it difficult for judges and others in the criminal justice system to cope with the change. The program shrank from about 200 inmates to just a few since December, without any notice or explanation from the sheriff.

As I’ve mentioned In previous blog posts, here, here, here and here, here. Clarke is a radically conservative authoritarian who pulled the monitoring program when he found out he had the power too whatever he wanted. Those who were monitored were following the law:

Kremers said. "They were following all the rules, doing everything we asked them to do, everything the sheriff told them to do, and they were suddenly pulled off the street."

Clarke ... argued that it was cheaper to house inmates in jail at a time of declining inmate populations than to monitor them electronically. Kremers disputed that, pointing to a federal study that said incarceration costs six times as much as community alternatives.

"I didn't make a snap judgment," Clarke said. Electronic monitoring was introduced as a way to control jail overcrowding and that's no longer a problem, he said.

It had nothing to do with being humane, fair and reasonable.

Clarke also cut the security staff for President Obama’s recent visit, to protest budget cuts to his department. I kid you not:

Supervisor Gerry Broderick called for an audit of the program, which the committee approved on a 5-1 vote. Broderick accused Clarke of making the change because "the sheriff has suddenly become intent on blowing his budget" as a protest against a major cut to his 2012 budget that resulted in layoffs of nearly 50 deputies.

"Why doesn't the sheriff meet with the chief judge?" Broderick asked Clarke's top aides. “If it's not a tantrum, what is it?"