The concealed carry law comes with one big unintended consequences. It's now part of a political litmus test for public service. Especially in West Bend: 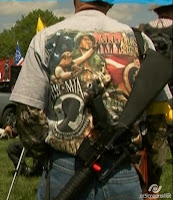 jsonline: The gun ban at West Bend's public library has been shelved. Last November, the Library Board voted to keep the building a gun-free zone. Tuesday, a newly constituted board reversed course - minus a member who wasn't con­firmed for reappointment because of that earlier vote and two others who resigned. They're strictly banned from schools. Members of the West Bend Library Board decided on the ban ... because they compared the child-friendly library with schools.

But making sense on public policy is no longer important. The following is NOT the way to fight decisions that endanger the general public:

Members Dave Krochalk and Judy Schaar then resigned, both citing a conservative agenda that started with overturning the gun ban.

It’s funny/sad how taking a firm, almost militant stand defending the gun ban is so off the table now:

Ald. Tony Turner, who's just taken his seat as the council's representative to the Library Board, led the charge in April against confirming three members who'd voted to keep the library a gun-free zone. He was quoted in the local newspaper as saying that night that he'd never vote for someone who'd made the library gun-free, a 'criminal safe zone.' When I talked to him Friday, he questioned the judgment of anyone who'd rule against constitutionally protected freedoms' the right to bear arms, obviously, a big one for him.

That's hogwash, of course, since the concealed carry law permits employers and public bodies to restrict where weapons can be carried by posting a notice on the front door. There was nothing unconstitutional about the former Library Board's decision.

Mayor Kraig Sadownikow, who had recommended reappointment of the former members and now is looking for two more, said he has no litmus test ... But he said that in weighing qualifications of potential appointees, defense of the Second Amendment is equally important as defending the First.


Summing up just how I feel about this slide into openly armed civilian public, like some third world nation:


Former library director Michael Tyree put it, 'For me, the criteria of being a library board member is that you're interested in the First Amendment, first and foremost. Open and free access to materials - rather than the Second Amendment.” Besides, 'The crime rate for our city doesn't substantiate the need to carry a gun.'

I can hear the drone of the tea party pocket constitutionalists now, "but it's constitutional."
Posted by John Peterson, Democurmudgeon at 6/19/2012 12:32:00 PM