Let’s talk about certainty, shall we?

Just when you thought the state and Scott Walker did the right thing to make sure the state bidding process was fair to all businesses, Walker’s own corporate lackey Paul Jaden said not so fast. Jaden says bid rigging isn’t banned at the Wisconsin Economic Development Corporation, so what's the big deal?

Talk about instilling a little “uncertainty” into the bidding process for companies hoping to create jobs through state contracting.

Hey, if the state likes a certain campaign contributor…I mean company, who knows what backroom promises will be made to steer the winning bid their way. Bid rigging. 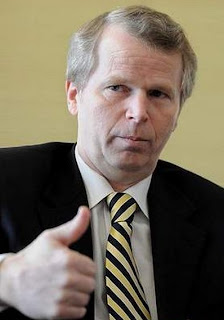 WSJ: From now on WEDC will ask companies if they are submitting or intend to submit a bid for state work before offering them incentives.

AP: WEDC leader Paul Jadin told The Associated Press his legal team advised him that the offer to Skyward Inc. was allowed because the year-old agency isn't bound by procurement laws that forbid bid-rigging.

It's not illegal. Is he kidding?

It’s nice to know the “government” part of WEDC has to play fair, but the private part can bid rig. Don't you love the free market.

Dereliction of duty? It also looks like Jaden let the cat out of the bag concerning Walker’s national campaign fund raising tour at the state’s expense:

Jadin also said there was a breakdown in communication with the governor. He had been updating Walker weekly on pending projects, but those meetings ended in March as a "victim of the recall process," Jadin said.

Yeah, blame the recalls for forcing Walker to leave the state, ignoring the state's business, just to fund raise.
Posted by John Peterson, Democurmudgeon at 6/30/2012 10:40:00 AM