The following Journal Sentinel's story has a powerful message, but sadly, that message is buried somewhere in the details. It's really very simple; accountability for taxpayer money, when going to Republican special interests, is gone.

While the Journal Sentinel blames the Doyle administration and Democrats for their lack of strict oversight, they seem to play down the Walker administrations complete removal of even that limited accountability. And you thought Republicans were working for the taxpayers?

It's a cruel joke really. While Republicans slash business taxes, they're giving our hard earned taxpayer money away to those...getting the tax cuts. And they're not keeping track. 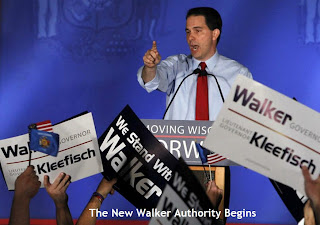 Accountability for the effectiveness of Wisconsin's economic development programs has been lax, and the Legislature should make agencies report each year on the benefits -- including jobs created or retained -- resulting from grants, loans, tax credits and other assistance, a report released by the Wisconsin's Legislative Audit Bureau said ... the DNR had ignored the requirement to report because officials thought it didn't apply to them.

Grants and loans administered by the Department of Commerce had the second-worst compliance rate on progress reports, at 68.7%. The Department of Transportation was worst, at 54%.


Opposite day, everyday, again in Republican world: Is Gov. Walker really fighting for the taxpayers? Not a chance, but don't take my word for it:

A new state law reduced the information on program results that the state agencies must report to the Legislature annually ... no longer required is quantifiable performance measures directly related to a program's purpose, including the number of jobs created or retained in each industry and in each municipality in the prior fiscal year. Also, agencies aren't required to report the amount of tax benefits allocated -- nor the recipients of them -- under the new rules.

Voters wanted this waste of money, this faux reform and downsizing of government. And now they've got it. Do you think the following is going to motivate Republicans to demand a stop to what appears to be blatant corporate welfare.