Slipping into Chaos, Citizens can use Deadly Force against Police Officers in Indiana.

Americans were broken, scare stiff after 9/11, the terrorist threat levels, the Great Recession, joblessness and the pressure of economic uncertainty. This is what disaster capitalism looks like.

And now this, the unthinkable has happened: 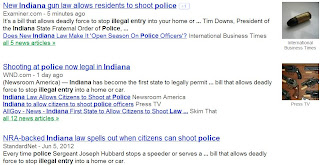 Opposing Views: In Indiana, police officers are upset over a new law allowing residents to use deadly force against public servants, including law enforcement officers, who unlawfully enter their homes. The law was signed by Republican Governor Mitch Daniels in March … adopted after the Indiana State Supreme Court ruled that there was “no right to reasonably resist unlawful entry by police officers," after a man assaulted an officer during a domestic violence call.

From that odd ruling came…

The law's author, Republican state Sen. Michael Young, said there haven't been any cases [yet] in which people have used the law to justify shooting police.

And from the hunters best friend…

An odd way of looking at law enforcement. Perhaps they could add “union members” to that description.

Tim Downs, President of the Indiana State Fraternal Order of Police, told Bloomberg News that the law could open the way for people who are under the influence or emotionally distressed to attack officers in their homes: “It’s just a recipe for disaster. It just puts a bounty on our heads.”

Indiana is the first U.S. state to specifically allow force against officers.