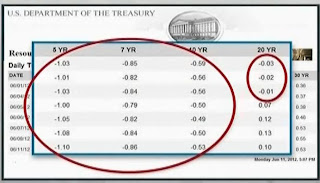 Because of the low interest rates, the market will actually pay borrowers, like state and local governments, to take their money for infrastructure improvements. That's right. Ezra Klein explains below.

The problem? Republicans never look that far ahead. They're stuck with a plan to take down the President, and cutting government. Even if this wasn't what was driving them, they still wouldn't borrow money to put people to work, because their new dumb as bricks tea party members won't let them.