Why does Scott Walker hate America?

When I hear the constant criticism by Republicans like Scott Walker, about how they have to restore America and take it back, I’m amazed flag waving conservative voters don’t get as mad as hell. We're not much different now than we were 20 years ago, so why hate America? 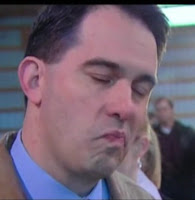 The Republican success at deregulation, downsizing government and letting Wall Street gamble with our retirement savings got us into this mess, wiping out business and causing massive unemployment. But displaced workers and their families, dependent on our safety net programs now, are incredibly viewed as the real problem.

Wispolitics: Scott Walker: “Sadly, the President and many of his allies seem to measure success by how many people are dependent on government programs. Those policies have failed.”

The “…many people dependent on government programs” were put there by Republicans, thank you very much, or did Walker forget that? They tanked the economy/spent like drunken sailors...remember? Just the opposite of failure, the safety nets succeeded in helping millions.

Walker: "In contrast, I and many other Republicans define success in just the opposite way—by how many people we can free from government dependence by growing the private sector."

How'd that work out? Oh yeah, we had the Great Recession. My small business closed down along with my clients. I was part of that bloodletting Scotty, thanks to "growing the private sector." Please, no more favors.

“Instead, we need to confront the powerful special interests in Washington and put the hard working taxpayers back in charge of our government.

Last I looked; public workers paid taxes and bought things at stores. And since when is privatizing the peoples government putting taxpayers back in charge…let's get serious.

THE FINAL INSULT-Republicans say AMERICA LOST ITS GREATNESS! Remember when Michele Obama said she was never more proud of her country, and the conservative's were outraged? What makes the following any different, or worse?

Let this be the moment in history where we can tell our children and our grandchildren that we helped restore our country’s greatness again. I believe we can because I believe in America.”

Walker’s previous campaign slogan, and I’m not making this up, was “Believe in Wisconsin again.”
Posted by John Peterson, Democurmudgeon at 6/16/2012 02:48:00 PM