Zombie Apocalypse on the way....

Call me burned out, but I am so tired of hearing the same old claptrap from the Democratic establishment, that my head is about to explode. And I don't want that to happen, because as a proud liberal zombie, and I need my brain seek out and eat other brains. As you're aware, brains are harder to find these days, especially in Wisconsin. I'm jealous too, because it appears that conservatives can live just fine without brains.

Which leads me to this nice piece from the Huffington Post, declaring.... 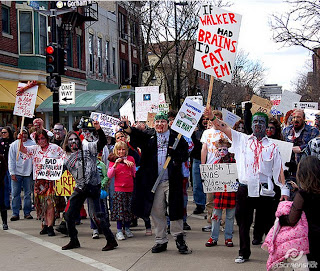 ...I Welcome the Coming Zombie Apocalypse

I am a zombie, or, as we prefer to be called by you brains on legs, Shuffling-Undead-American. Why so upset, television newsreaders? Most of you don't have a brain in your head, and are therefore perfectly safe from me and my fellow zombies. Are you so intolerant of other lifestyles -- well, deathstyles -- that you cannot let us die and let die?

Also, after the zombie apocalypse, you won't have to think so much about what to order in a restaurant, which is good ... Too much choice hurts your brain. And makes it less tender ... I don't mean this in any kind of metaphorical or allegorical sense, nor as a comment on the ways in the which the rich are feeding off the poor and middle class and sucking the United Ss of A dry. No, that would be my upcoming post on vampires.

But the zombie movement is only expanding to actual government policy:


The B.C. government has put together some advice on fending off the brain eaters . The Centers for Disease Control and Prevention in the U.S. has a similar site that they set up, for a similar reason.


"If you are generally well equipped to deal with a zombie apocalypse you will be prepared for a hurricane, pandemic, earthquake, or terrorist attack," said CDC director Dr. Ali Khan on the site .

However, the CDC said they do not know of anything that would cause dead people to come back to life

Labels: Zombies
Email ThisBlogThis!Share to TwitterShare to FacebookShare to Pinterest