Right Wingnut Jerome Corsi, birther, has a bridge to sell you, to fantasy land. 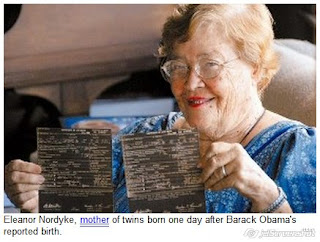 I really love this latest conspiracy theory put out there for the crazy right wing bottom feeders. I usually don't waste my time with this stuff, but what the hell!
Jerome Corsi, the author of the ill-timed book titled, "Where's the Birth Certificate?," wrote this “article” for WorldNetDaily in the desperate hopes right wing conspiracy theorists would not abandon the Republican Party’s expansive Obama smear campaign. After all, he’s black.

Newly unearthed information about Hawaii's procedure for numbering birth records at the time Barack Obama was born casts further doubt on the authenticity of the short-form and long-form birth certificates published onlinewith the president's authority … analysts have wondered how Obama could have been issued a registration number that is higher than the numbers of the published birth certificates of Susan and Gretchen Nordyke, which were registered three days later than the president's.

Here's the Daily Show with another great conspiracy theory: