Besides having an already bad history in the state, back in 1999, out of state capital investment companies are making a comeback thanks to Scott Walker. Remember, we cut over $800 million from public schools. This stunning corporate giveaway is inexcusable: 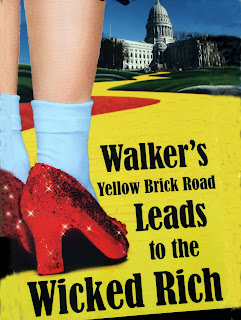 jsonline: Legislation that Gov. Scott Walker says will create jobs would provide hundreds of millions of dollars in tax breaks to insurance companies, while giving control of a $250 million fund to out-of-state financial management companies that would not have to pay back the fund's principal and would keep up to 80% of its profits. But some others - including at least one Republican legislator - are calling it a massive corporate giveaway … The capital companies would get to keep the principal at the end of the life of the fund, and also would collect management fees (capped at 2%) and as much as 80% of any profits.

That's a lousy deal, as you'll see later. The shocker is Republican thug Sen. Glenn Grothman and I are in agreement:

The program is called the Jobs Now Fund … Opponents say the proposal to give tax credits that guarantee the insurance companies will recoup at least 80% of their investment is no more than a handout from taxpayers. Sen. Glenn Grothman (R-West Bend) said the legislation mirrors an unsuccessful proposal in 2003 by then-state Sen. Ted Kanavas, who led discussions about Walker's venture capital strategy.

"The bill ... is the most dubious giveaway I've seen since I've been in the legislature," said Grothman, who has been in the Legislature for 17 years. In written testimony submitted for the hearing, Tom Hefty, the former chief executive of Blue Cross/Blue Shield of Wisconsin, called the program "the largest special interest Wisconsin tax cut in history masquerading as an economic development initiative."

Or put another way;

"The bottom line is this is a $200 million toilet Wisconsin is buying," said Julia Sass Rubin, an assistant professor of public policy at Rutgers University. "The question is not 'Does it flush?' It's 'Why the hell are you paying $200 million for a toilet?'"

Rubin and other critics say capital companies run expensive, inefficient programs that they sell to states with aggressive marketing and intense lobbying efforts - and some point out that better, less-costly alternatives exist.

This is a corporate giveaway like no other, where Wisconsin could have gotten a better deal, but didn't try.

Tennessee's TNInvestco program returns 50% of its original principal and 50% of the profits to the state. The InvestMaryland program, which cut out the capital companies but uses insurance tax credits, gives that state 100% of its principal back along with 80% of the related profits.

To Rubin, the Rutgers professor, "I'm all for venture capital, but the state should be treated like every other investor in venture capital," Rubin said. "Is Wisconsin such a dump that you have to get bled to get people to invest in the state?"

It is now, thanks to Gov. Walker.